Building off of the high engagement levels from the experiential aquarium photobooth, extend the "entertaining while educating" strategy on Facebook.

Using the same "entertaining while educating" strategy, I developed the concept "I'm a model for clean water," which would capitalize on the connections of several local influencers. The result was a tongue-in-cheek Facebook campaign that garnered increased levels of engagement. 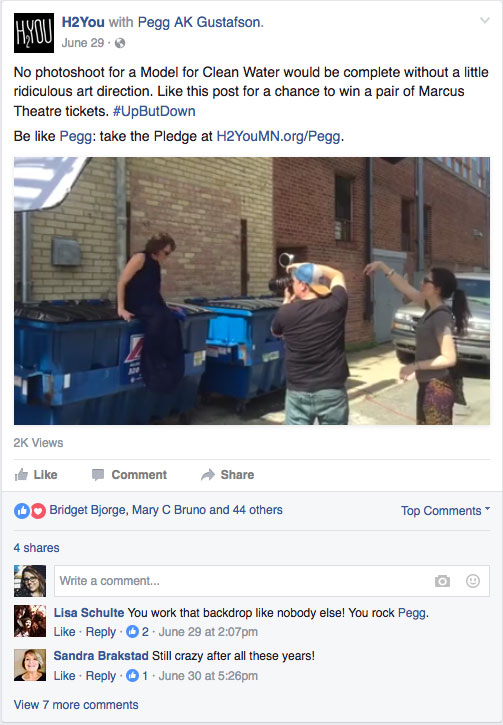 Each of our five influencers came from smaller communities within the larger community of St. Cloud. As a midsize metro that abuts a much larger metro (Minneapolis-St. Paul), St. Cloud is often shortchanged, such as in the case that it has no TV news station or major sports team — and thus fewer celebrities. As such, we dug into influencers within “micro communities,” where influencers’ reach is more effective and personal.

Much of what H2You has been able to accomplish in public awareness has been done on a low budget consistent with a small, local nonprofit. As such, several grassroots, guerilla and experiential concepts have helped H2You reach larger audiences.

Each influencer was asked to share from the H2You page their debut “model” photo, which mimics a Vogue-like magazine cover, along with a personal message begging to be responded to by their followers.

Secondly, influencers were asked to change their profile and cover photos, as well as share one behind-the-scenes video.

Organic reach was off the charts for the influencers who were active participants in conversations about their content. Mary Bruno and Nick Barth, in particular, had extremely active and engaged followers who did at least two of the following (like, comment and/or share).

In addition, follow-throughs to the H2You website increased by 20% compared to previous years' campaigns.

hear from my colleague