As prom season rounds the corner, new trends are flying off the shelves in showrooms across Central Minnesota.

But one constant seems to remain every year: sparkle. And there's nowhere it counts more than in shoes, where no centimeter is spared.

Slippers, stilettos, open-toed or flip-flops — what most matters is whether the shoe sparkles, say local prom and bridal shop managers.

Sparkle is a consistent theme among all types of prom shoes but recently has enjoyed increased popularity among more novel shoe types, such as tennis shoes.

At A Specialty House in Midtown Square Mall, operations manager Rebecca Krasselt is quick to point out the store's sparkly tennis shoes.

By far, the sparkly tennis shoes have been the most popular shoe purchase at A Specialty House, which opened in 2014 in Midtown Square Mall but previously was run out of owner Renee Strang's house for more than 20 years.

While modeling her dream prom dress at A Specialty House, Brooke Lebrun of Monticello said she originally planned to wear Crocs or Vans. But soon the sparkly tennis shoes nearby caught her attention.

"Love these!" said Lebrun, who said she preferred shopping for prom dresses in St. Cloud over the Twin Cities due in part to time limits placed on shoppers in the Cities.

Both Krasselt and Alter note that girls seeking the most sparkle tend to purchase shoes that feature Aurora Borealis crystals, or AB crystals for short.

Produced using a special coating, AB crystals give the effect of a rainbow, providing an extra level of sparkle.

"Glitz is the biggest thing they are looking for," Krasselt said.

At Carrie Johnson Bridal, shoes with AB crystals are "flying off the shelves," Alter said.

While there are a variety of options for shoes, Krasselt recommends also considering what shoe type would work best with the dress type — and their date.

Dresses with slits should be paired with shoes with some pizzazz. On the other end of the spectrum, floor-length dresses can be paired with more subtle shoe types.

The height of your date is also a large consideration for prom-goers who wish not to tower too much over or under their date, Krasselt said.

While sparkle is a constant every year in both prom dresses and accessories, Alter has noticed a trend this year toward more sophisticated styles.

High-collared dresses mimicking the art deco-inspired style of the 2013 film "The Great Gatsby" have been very popular.

While the majority of girls place sparkle at the top of their priorities in searching for prom attire — and especially shoes — each girl ultimately knows what she wants before arriving at a store, Krasselt said.

"Girls have an opinion on what they want, and they come in to get it," she said. "They want a showstopper."

And the sparkle factor is one sure-fire way of attaining that showstopper status. 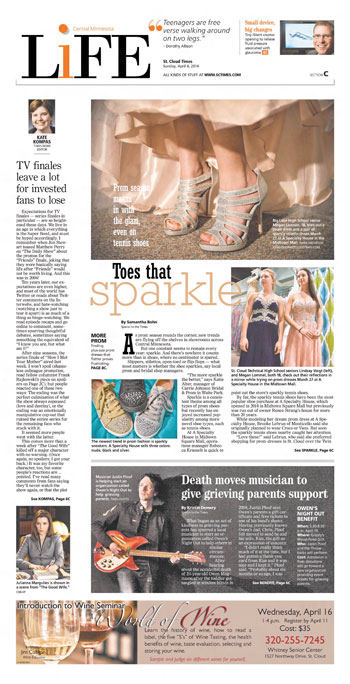